Let’s have an amazing experience in fresh snow with us!

Murodo is the highest station on Mt.Tateyama. In years when snow fall comes early, snow can fall here in late September. This early snowfall usually melts away within 2 or 3 days. From early or mid-November, the snow no longer melts and Murodo is covered with a continuous blanket of snow that will not melt until spring. You can see the “Snowy World” aspect of Tateyama just before its winter lockout. 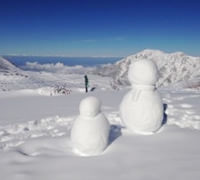 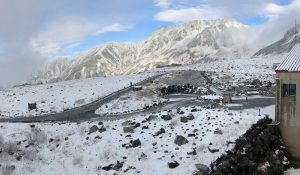 
If you are going to Murodo to experience the new snowfall in November, we recommend Omachi IN.

In November, please be aware that due to bad weather—snowfall and high winds—service may be suspended for the Tateyama Kogen bus (Bijodaira-Murodo), and delays in the schedule are possible. For service conditions, please visit the top page of our website or ask local station officials. If you are going to Murodo to experience the new snowfall in November, we recommend Omachi IN. Hardly any of the vehicles on the Ogizawa-Murodo line will stop in Murodo due to the effects of the snow. With Omachi IN, you won’t be able to pass through if service on the Bijodaira – Murodo line is temporarily stopped, but you will be able to go to Murodo (via a round trip from Shinano-Omachi/Ogizawa to Murodo).